The Ceki deck of cards were widely popular among ethnic groups living in Malacca. Widely played by the Baba Nyonya’s and the local Portuguese, it is still played today by their descendants. The Portuguese call this game ‘Patui’.

Each card in the Patui game represent something. In this piece I have chosen 4 character cards to be depicted in the painting below. They represent my multi ethnicity and ancestry through art.

The Malalyu (Malay) and The Tuan/’Ropianu'(white man), merges as one to represent the Portuguese in me,
The Muru (Indian), for my Singhalese heritage.
Cina/ ‘Chee-nea'(Chinese) for my chinese heritage.

Together these four cards sum up what I feel about Malaysia and being Malaysian. She(Malaysia) can be nurturing and kind. She embraces with open arms the co existence of her children, no matter their ethnicity or religious beliefs. For this I am proud to be a Malaysian. 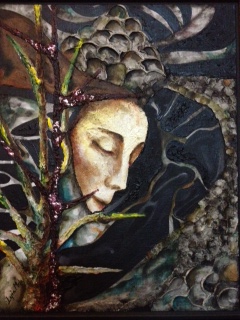 Part of a pair, this is my favourite of the two.

The title speaks for itself. This piece actually came to me in dream. I felt the serene dark beauty that was both scenic and surreal. Its tranquility descended on me but I felt an ache and noticed the absence of birds and other life. I tried to convey the feelings I felt when I had dream t this piece and the way the scene kept ‘shifting’ and ‘altering’ before me.

The colors used in this piece were to express what I feel when a woman grooms herself.

One of my earliest mediums was cosmetics. This usually includes eyeshadow, black kohl, mascara and lipsticks. I decided to explore it again. Here are some that I’ve done recently. 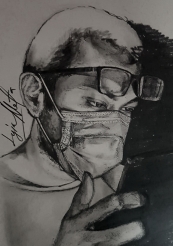 Pen and ink on paper.

Born McKinley Morganfield on April 4, 1915 in Rolling Fork, Mississippi, deep within cotton country, as a boy he was given the nickname Muddy Waters. 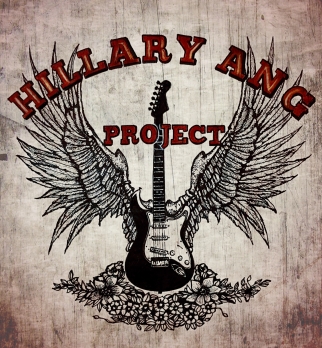 The sound holes on the guitar was something I had to work around as I didn’t want the artwork itself to be compromised.

Defiant, angelic and a Guardian.